Between Faith and Academia 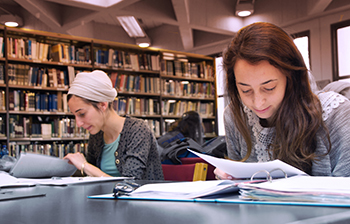 During her MA studies Lior Zaks Shmueli (28), currently a doctoral candidate in BIU’s Department of Jewish Thought, felt she needed a women’s Beit Midrash framework that wouldconnect between her academic studies and critical thinking and her religious beliefs, and provide spiritual guidance. “My academic research stirs up certain existential questions, usually unrelated to the research itself. The Beit Midrash is the place to raise these questions. But it’s rare to find a Beit Midrash for women with advanced degrees," says Zaks Shmueli, a married mother of three. "The BIU Beit Midrash provides an intimate, uplifting and open-minded environment, the perfect setting to help apply the principles of the Torah to real life. It’s important for me to merge my academic knowledge with my experience of faith as an individual in a group striving to leave a mark on the religious world.I decided to study Kabballah and Jewish mysticism, she continues, in the belief that these subjects have the depth that is critical and meaningful to learn and to impart to others. University supports my chosen career path studying Jewish heritage and the history of our people."

As an observant Jew, Zaks Shmueli realized that the religious world must rise up to the challenges created by science. So she turned to Dr. Tova Ganzel, Director of the BIU Midrasha in the Jesselson Institute of Advanced Torah Studies, to explore different options. In a meeting with Dr. Ganzel and her deputy Yael Schlosberg, Zaks Shmueli spoke about the need to set up a group of women researchers who can integrate between the spiritual and the academic with the belief that cross-fertilization between the two would be mutually beneficial.

She knew the university-based Midrasha, the only one of its kind in the country,, was the perfect setting. And so the Ma’aminot V’Hokrot Jewish Studies Research Program was established for graduate or post-doctoral researchers in the humanities or Jewish studies.

“The disconnect between my religious life and my scientific vocation is profound, even 15 years after completing my PhD,” says Dr. Rivka Raviv (59), a lecturer at the Midrasha and Head of the Ma’aminot V’Hokrot Jewish Studies Research Program.. “Its hard for any religious woman in academia.”

The Program was launched last year as a four-session workshop, but due to demand, it was expanded and currently includes 16 women researchers from a range of disciplines, ages and degrees who assemble every two weeks during the academic year in a Beit Midrash framework. “We take our spiritual cues from the the late Rabbi Shagar (Shimon Gershon Rosenberg), who was an authority on post modernism, science and faith. He believed that Torah beliefs  can benefit from academic methodology, particularly Jewish studies, which promote refelction and awareness of  religious processes,” says Zaks Shmueli. On the other hand, according to Dr. Raviv, referencing her long time spiritual guide Dr. Daniel Shalit, , says, “This gap between two worlds can inspire growth,” It can strengthen your convictions and make you a better Jewish scholar, having gained both the internal and external perspectives.”

This Program is not just about study groups. In addition to creating a supportive environment for women scientists, the Program aims to encourage Torah based creativity. To that end, each participant is asked to create a class in the Midrasha and write a Torah related academic article.

“One of the key benefits is that we can utilize our academic knowledge and tools to create substance and deepen our understanding of the biblical texts in a unique way,” says Dr. Raviv. “There are historical precedents to this. For instance, in medieval Spain, a Jewish intellectual would study the Torah alongside mathematics, philosophy, medicine, and other sciences, benefiting both worlds. Reading Nahmanides’ interpretation of the story of creation using philosophical terms, or Maimonides' interpretation of basic Torah laws using Aristotle’s theories, we realize that in every age when there was an encounter between the academic world   and Torah , the understanding of Torah was deepened. I hope these incredibly skilled women will be able to use their academic expertise to contribute in the future to significantly broadening and enriching Torah study."